The State Bank building was designed in an “Egyptian” style by architect Harry W. Jones and constructed in 1910 along the west bank of the Cannon River. The building was built of hollow bricks and covered with cement. The stained-glass dome added light to the building’s interior, as well a sense of distinction to the building. In 1981, attorneys Hvistendahl and Moersch purchased the building and have made considerable repairs and renovations to its interior and exterior.

The State Bank of Northfield

The State Bank of Northfield was founded April 16, 1910, by its officers, W.W. Pye, president; A.O. Netland, vice president; and S.A. Netland, cashier. The State Bank moved into its quarters on the site of the old Gem Theater at 311 S. Water Street on Saturday, August 27, 1910, according to the Northfield News. The officers of the bank had engaged Harry W. Jones, a Minneapolis architect, to design the building. Jones said, “Another building just like it cannot be found in this country.”

Robert Pye, son of the president, wrote in 1980, “Dad made a rough sketch of the way he wanted the bank to be built and turned it over to Harry Jones, who, I believe, was the architect who designed our home at 613 East Fourth a few years before.”

During his career, Jones designed several other local buildings including the former Odd Fellows Hall; Hill House, which sits north of Central Park and is now a Carleton dormitory; the Methodist-Episcopal Church, which sat for many years at Third and Winona; the Bishop Whipple Church and City Hall in Faribault; and Butler Square in Minneapolis. His work can be reviewed in Harry Wild Jones: American Architect by Elizabeth A. Vandem, published in 2008 by Nodin Press, Minneapolis.

The architectural style of the building is Egyptian revival, typified by the angular columns surrounding the front door, and adapted to the peculiarities of the pie-shaped lot. The News said, “Its odd shape gives it a frontage of 60 feet and also serves to make it one of the best-lighted office structures in the city. Both outside and inside it is evident that simplicity and harmony have been the principles which have guided the architect in designing it.”

Bronze-plated doors opened onto the circular lobby with the terrazzo floor under the colored-glass ceiling in the dome. To the right were the cashier’s office and three service windows. Along the street side were a customer work alcove and desk, chairs, and a seat set into the wall, as well as the elegant board room and a private consultation room.

From the rotunda was suspended a bronze chandelier and beneath it stood a tall circular mahogany customer-service table which was designed by S.S. Netland and H.W. Jones to be used for a signing table. The original signing table remains in the center of the rotunda.

The rotunda was defined by eight pillars holding up wooden beams. The office fixtures were mahogany finish, and all the furniture was mahogany. The counters were marble and the teller cage grills were brass.

The rotunda woodwork was formed by bending 1 ½” birch in a steam press, which created the round layered wood band at the base of the dome.

Across from the directors’ room was the vault, built of steel and concrete. The News reported, “It has steel girders being laid an inch apart in the floor and ceiling and then filled with concrete. The side walls consist of 18-inch thickness of concrete and, in addition, a thickness of brick.” The steel door to the vault weighs 2000 pounds and inside the vault stands a solid steel 5000-pound double time-lock safe. The vault extends into the basement for storage of records and papers.

In 1929, the State Bank was bought by Bancorporation, the holding company for Northwestern Bank. Northwestern State Bank remained in the original building until 1962, when it moved to 500 S. Water Street.

Lyle Severson filed a request for a building permit in 1962 to remodel the building for Sawyer & Lampe, attorneys. Burton R. Sawyer had purchased the property from the bank on November 8, 1962. Robert G. Lampe purchased the building from Sawyer in 1969. In November 1971, Lampe & Fossum requested a building permit to remodel two offices within the building by only changing the inside walls on the west side of the building. A wall was added to make room for another attorney, Bernard Borene, presently a Rice County judge. Lance Jacobsen reported that the wall had a hole in it for two file cabinets, one opening into each office.

Still missing, however, are Jones’ blueprints of the building which were in the basement at least until 1962, according to Bob Lampe.

The February 19, 1976, News reported, “The present home of Judd Jacobsen’s Travel Headquarters, Inc., has been sold by Robert Lampe to Tudor Music.” Tudor moved in on March 1 and remained there until the business was dissolved in 1980. 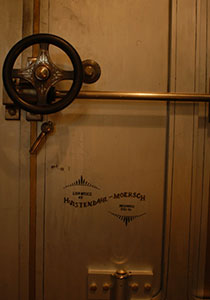 Our Acquisition and Restoration

The building was purchased from First Bank-Northfield, by J.K. and Marion Hvistendahl on October 9, 1981. After some of the renovations began, the building was occupied by the law office of Hvistendahl & Moersch in December 1981.

The new owners and the tenant attorneys renovated the building. The street face was sandblasted, recemented and painted, and the outside of the dome was changed from silver to gold. It has been repainted four times since 1981.

Inside, the terrazzo floor was stripped of orange carpeting, which had briefly occupied the Great Hall at Carleton, and a layer of brown linoleum tiles was cleaned with industrial solvents and repaired by Harry Vohs of Faribault. The tacky imitation wood-grain paneling in the offices and the blond paneling in the rotunda were replaced with sheetrock walls. The original vault door was repainted by a Carleton art major. New copies of Victorian brass two- and four-arm light fixtures were purchased from Heirloom Brass of Dundas for the entry, small office, and back-room entry. Antique light fixtures with Hollophane shades were purchased from antique lighting dealers and hung in all other rooms.

The original customer service table, which had been in the custody of the Northfield Historical Society, was traded back to the building in exchange for oak display cabinets which had been left by Tudor Music.

Much of the woodwork that had been removed in remodeling done after 1962 has been replaced with new, matching, custom-milled wood. The new walls were completed with matching woodwork, stained walnut by mixing three colors of stain. Don Hansen of Hansen Woodwork in Nerstrand duplicated the curved arch from which the tellers’ cages were suspended. Hansen also milled the woodwork for the basement addition, which was completed in 1986. 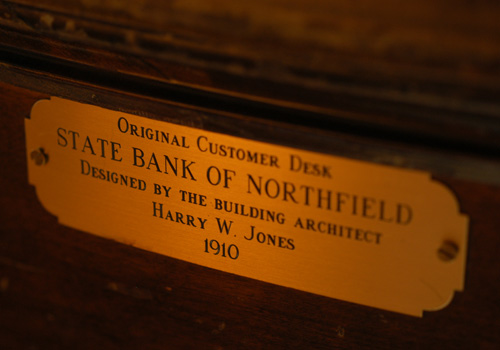 David Kjerland, stained glass master, restored the stained glass ceiling during the winter of 1990–1991 and after the hail storm in 2006. New wooden interlocking and self-supporting frames were made by Don Hansen, Nerstrand Woodcraft, and fitted with the help of Kjerland and Alan Cupp. Kjerland also created the stained glass windows facing the street. The windows have local themes—The Cannon River, The Colleges, and Prairie Creek Bigwoods.

The massive vault is still intact and in use for storing client files. We tracked down the safe, but too late—it had been sold for salvage to Viking Auto Salvage.

While the City of Northfield was attaching the limestone flood wall to the building in 1986, the building owner had an opportunity to renovate the lower level of the building, which is well below the 100 year flood level. The floor had to be lowered two feet to allow for adequate headroom. Since there is only one entrance to the building, all of the concrete and dirt had to be removed through the window and dumped on a construction road in the river bed which had been built by the city. The lower level was constructed by Olson Brothers (Steve and Mark) Construction of Northfield.

After searching for an appropriate chandelier for more than 10 years, Hvistendahl located an appropriate piece in New York City. The chandelier was purchased in November 1993 from Irreplaceable Artifacts of North America at a cost of $5,000.

Hvistendahl purchased the building from his parents on January 1, 1994. His mother Marion joined him in purchasing 305–309 S. Water Street from Gene Jasnoch in August 1998, bringing 305–311 S. Water Street in common ownership. Hvistendahl bought out Marion’s interest in 2006. 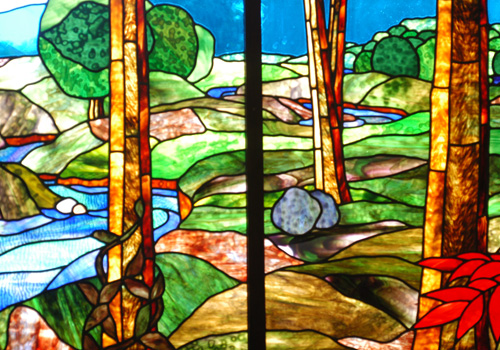