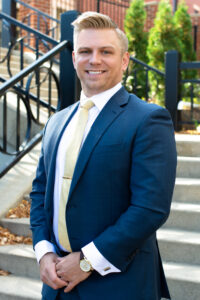 Tyler attended law school at Mitchell Hamline College of Law, graduating magna cum laude. He was actively involved in many of the opportunities for learning beyond the classroom: he was a student attorney and law clerk with the First District Public Defender’s Office and the Rice County Attorney’s Office; achieved a certificate in conflict resolution and became a Rule 114 Qualified Neutral with the State of Minnesota; selected as a member of the school’s prestigious negotiation team and placed as a semi-finalist during regionals. He was also an active volunteer with the Minnesota Justice Foundation, spending over 70 hours assisting indigent clients with legal matters.

Tyler’s legal education started in his undergraduate years where he earned a paralegal certificate and marketing degree at Hamline University (graduating with honors). Following law school Tyler was a judicial law clerk, where he gained invaluable insight into the judicial process.

Tyler is the consummate team player and lifelong Minnesota sports fan. In college he played football and served as the team captain. He was awarded academic all-conference in his senior season. Tyler has been a hockey referee for nearly two decades and referees youth, high school and collegiate hockey.

Outside of the law, Tyler enjoys spending time with his wife, son, and dog.